A downloadable game for Windows

Make your way through a paper doll’s house in a short, quirky adventure game. Journey from room to room generally helping out and doing stuff. And it looks like it’s made of paper which is cool.

There's no music but it was supposed to have this playing so please listen to it thank you https://www.youtube.com/watch?...

Arrow keys to move and mouse click to action objects. Access the inventory via the back in the top right corner of the screen. Alt-F4 to quit.

Extract from the zip and double-click Kirigami.exe to run. Recommend playing full screen. On slower machines the game can take a while to appear!

A really beautiful game. The art style is so good. We enjoyed it very much.

Here is a short video we made while playing:

Keep up the good work!
Reply
Bellannmae2 years ago

Super adorable game! Although I had issued and seemed to keep getting stuck, I still enjoyed what I played. I hope someday you can expand on this more!

Thank you soooo much, i'm really glad you enjoyed it! I'm sorry you hit so many bugs, that's really lame. I'm hoping to work on a Kirigami 2 with much more polished style and hopefully less bugs haha!

Jumping on the bandwagon to say just how cute and adorable this game is! The puzzles are fun and you can tell all the love and attention to detail that went into this game. There were a few minor bugs (walk cycle randomly stopped working, dog froze mid run, trap door kept slamming) but I seriously did love this game! I hope you are still making content, I eagerly look forward to what you'll come up with next!

Thank you soo much for all the support and putting all that time and effort into your videos!! I'm sorry about all the bugs but i'm really happy you enjoyed it anyways! That's great because I am planning to make the next instalment soon :D

Great game! Some bugs throughout, but it was nice helping people out and doing good things in a game :3

Yay! Sorry about the bugs, I'm glad you're into the positive attitude i was going for :3 Thanks so much for making a video!

This is my favourite game. I had it on my old computer and now I'm downloading it to my new computer. I loved the music suggested to add to this, too.

oh my god are you serious?? That's so lovely thank you so much!!! wow that made me so happy :D

I really enjoyed this game, good job and keep up the work!

Hot Witches hahahha :') You into the crazy chicks too then?

Really appreciate it, thanks for putting the time into making a video - every view helps <3

Falling in line with everyone else, this game is adorable.

That said, I really like what you have going on in this game. The choice to make it all look like paper and hand drawn doodles worked very well to give it a unique style. And, of course, the art itself is well drawn, and I like that the characters are all squiggly. It truly feels like a little paper craft house or diorama come to life. The way everything pans with the camera and the way some objects go behind others was really pleasing to watch. A nice 3D effect. While I've never been super into point'n'click style games, I could definitely see myself enjoying a longer version of this.(Hint-hint, nudge-nudge.)  Good job, dev persons.

In a side note, I found that using WASD to control the character somehow had almost no walk cycle. Personally, I find it quite amusing and am not bothered by it at all, but it felt like something to point out.

Thanks so much! Sorry you had some trouble, but I'm really glad you enjoyed it, this is a really helpful review and it's great to hear the style is so well received!

This game is freaking adorable!

thank yoooou, no you're freaking adorable!! thanks for putting the time into making a great video  <3

The art style for this game is honestly adorable! I did run into a problem with the text glitching when I gave the witch the letter and I also didn't grab the circle puzzle at the end of the game before I went up to the attic where I got stuck and had to re-do the whole game to fix the problem. Other than that the game was very endearing and I thouroughly enjoyed creating voices and backstories for the characters in my mind. I did post a gamepley video for it on my small channel and if you got a chance to check it out I'd be very appreciative. Thank you for creating such a cute point and click game!

oh god i'm so sorry!! that's such a crappy glitch. I'm so so glad you enjoyed it enough to get past it though, that means so much to me! hahah thats so awesome, thanks again for making great content, every view helps <3

Ran into more than a few glitches, and had to restart, and even uninstall and re-download the game due to problems. However, I finally completed the game.

The art style is good, but felt some of the animations were lacking. Your character can never turn around, and the walking animation straight up doesn't work sometimes. The quests were rather simple, which isn't a bad thing, and the character design was cutesy and endearing.

I felt the ending was rather bizarre. I don't know if there is some folklore that would justify the cat *SPOILER AVOIDING* doing the thing at the end, but I would have rather expected something more rewarding than what was given.

Either way, thanks for making this. You can see my entire experience with it here -->

man that's pretty bad, i'm really sorry about that. Thanks for persevering with it though- I really do appreciate it! And this is some really helpful feedback and i'm sorry you felt disappointing by the ending, i promise the next one will be better! Thanks for sharing :D

I love, love, loved this! Can't wait to see more! Such a unique style, and I adored the art!

how cuteeee <3 thank you so so so much! More is coming! Thanks for sharing your video!

Hi there, I just wanted to let you know that I played your game, and I also made a video of it. I hope that's okay.

I really liked this game, I thought it was wonderfully charming. So thank you for making this really cool little game ^^

haha thank you so much! Sophies unite!! I really liked your video, thanks for making it too <3

So I had a blast playing this, got stuck but positive the artwork I was submerged in, thank you guys for the experience, please slap me in the head because I got stuck at some point, and Im sure it was because I was ridiculous and missed something haha, other than that the gameplay was solid, I did like the interactions, definitely the best quality about the game, amazing work devs! :D

kirigami omg was that a good time :D

Thanks for making the video, glad you liked it!

'Chrome is key' had be laughing for ages!! I didnt even realise it looked like it :')

Thank you so much for the video,  glad you enjoyed it!

This is just so cute! The cat looks like a ninja but has to do stuff for other people in order to... make it to the end! No spoiling the ending!

Thanks for making the video!

I had some difficulty with the initial start , but the game it's really well done
Nice JOB
My Feline adventure

i can't finish downloading it. why? :(

Very good job on the game folks! It's cute, funny, californian and a pleasure to watch and play, a chilling and catawesome adventure :D

I made a video playing it:

if you want to check, except for a couple of bugs it was a very nice experience, and I'd gladly play more if you intend to expand it, so best of luck for your project, cheers!

I loved the game. I enjoyed the art style and paper themed world.  It was rather odd to having to use the arrow keys instead of WASD, though.  I also noticed that WASD still functioned, but the walking animation for it didn't appear. Regardless, I enjoyed playing this so good job!

I really enjoyed this! The art style is awesome and I really liked the puzzles too! Looking forward to seeing your future games!

Had a few issues the firs time I played but things were smoother after that. It was a lovely adventure. :)

Thanks very much for playing and making the video! Were you using cursor keys to move, or WASD?

I was using WASD. It's easier to go for that when having to use the mouse too.

Ah the WASD controls were left in unintentionally, it ideally should be played with the cursor keys and then you shouldn't get as many animation problems. 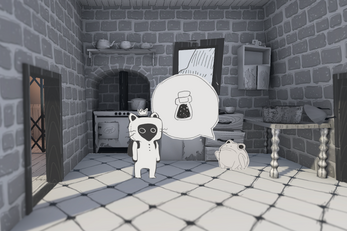 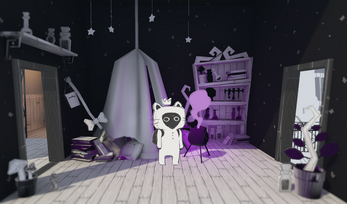 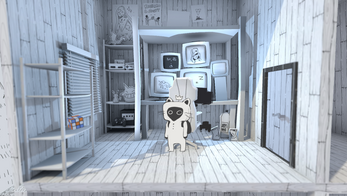